By CVB Author on Oct. 22, 2008
Being at the homecoming game and seeing all the alumni come back to Athens to support the Bulldogs got me thinking about the traditions we have at the University. Some of the football traditions go all the way back to 1892 when the Bulldogs played their first game (and won, 50-0!) against Mercer on what is now known as Herty Field. Some traditions are just getting started today, and may continue to live on long after current students have graduated and left Athens.

Here are a few of my favorite old football traditions in Athens:
Since I've been a student, I've witnessed the birth of a few new traditions.  While they may not be as long-lived as the above traditions, they have been fun to get into over the last few years.
Blackout. Starting at last year's Auburn game, Mark Richt requested that Bulldog fans unite to all wear black and transform Sanford Stadium's typical sea of red into a blackout.  In addition, the team came out in original black jersey's for the occasion.  The excitement of it all was enough to bring a 45-20 win against one of the University's biggest SEC rivals.  The jersey's were worn again at the Sugar Bowl, which resulted in a 41-10 victory against the previously undefeated Hawaii.  However, after the loss to Alabama a few weeks ago the Blackout tradition may not live on as long as intended. 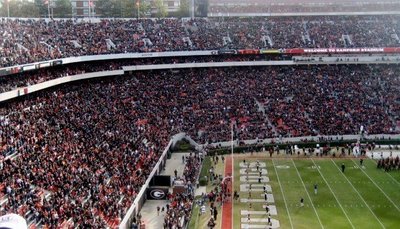 "Soldier Boy".  This popular rap song and the ensuing dance craze were all over Athens last year.  When the Bulldogs needed a pick-me-up in the Auburn game, the song was blasted over the loudspeakers and students and athletes alike spontaneously broke into the dance both on the field and in the stands.  At several other games throughout the season, this song was played to pump up the crowd and the team.
"I Put On For My City".  Another popular rap song, this seems to be the Soldier Boy of 2008.  It has been played at all of the home games this season, and the stadium goes wild every time.

Who knows, maybe in 100 years students will talk about those oldies songs "Soldier Boy" and "I Put On For My City" that Bulldogs used to cheer to way back in 2008.
Author